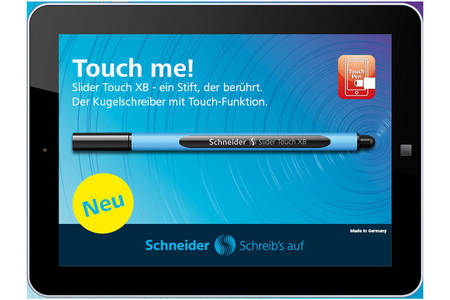 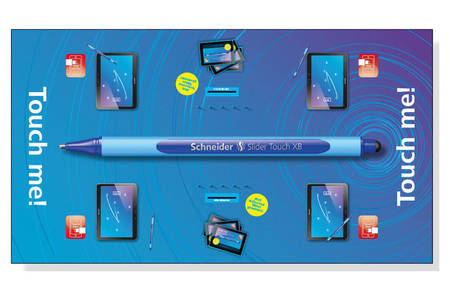 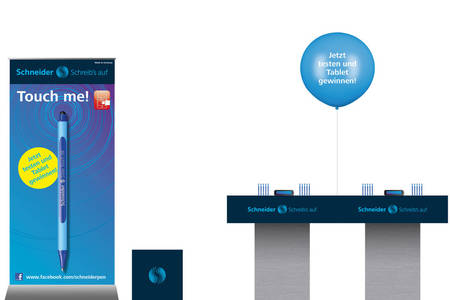 Draft of the Promotion stand 2015

It is the fourth year that Schneider realizes its famous Slider Roadshow. The annual promotion tour is all about the Slider products. The so called page surfers have gained a lot of popularity yet they convince with their easy gliding writing sensation.
This year’s protagonist of the tour is the new Slider touch. The Slider products Slider Memo, Slider Edge and Slider Rave have become very popular and are already favorite products of the Schneider range. Due to the roadshow they receive increased attention in the trade and among consumers. Since the beginning of this year the Slider Family has a new member: the new Slider Touch- the first Slider ballpoint pen which has a stylus tip on.

In the world of stylus pens, which, for reasons of conductivity are normally made of metal or conductive black plastic, the Slider Touch stands out strikingly with its variety of colours. Schneider has developed a unique operating principle which makes the Slider Touch conductive even with a rubberized surface and coloured plastic. Nobody has accomplished this before, leading Schneider to apply for a patent for this development! Not only because of its 6 different casing and ink colours, but also in terms of price, the Slider Touch differs from other stylus pens. The price for the Slider Touch is considerably lower than the average stylus pen. Enough reasons to go on tour with this new model!

The tour starts in September and will take place at about 12 highly frequented shopping malls, stationary shops and movie theaters like Cinemaxx and Cinestar. Professional promotion teams lead the campaign, address the target group and let them test the new Slider product.

This year’s competition is particularly clever: The promotion areas include tables with tablets on which the target group can use and experience the advantages of both - the stylus tip and the ballpoint tip.

The raffle consists of a tablet game where one has to pull the Schneider logo through a labyrinth as fast as possible. Therefore one has to use the stylus tip. Once finished the game the user receives a code which needs to be written on a postcard wherefore the ballpoint pen is used. By means of this game, the target group can be convinced of the quality of the pen and at the same time great prizes can be won: the grand prize winner receives 3000 €, also 4 tablets will be raffled and other great prizes. Eye-catching digital info-screens are used to support the roadshow in frequented areas in the urban environment such as suburban trains and bus stations. Attractive competitions are also taking place at the same time in the Internet e.g. in the social media. Attractive displays and extensive decorative material is available for retailers to announce and present the roadshow.