“Our nature is too beautiful to fill it up with parking lots.” 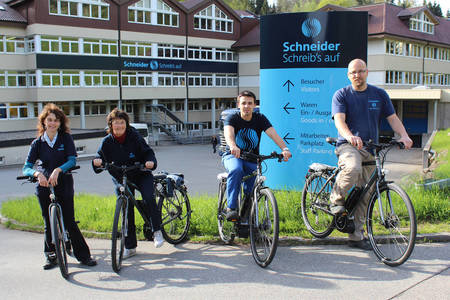 Schneider employees with their new E-Bikes

The surroundings of the Schneider Company are inviting to use the E-bike.

In the last two years, Schneider has grown disproportionately. New jobs were created and therefore the workforce expanded by around 10 percent, which means 40 persons. The new employees of course need space - and not only for themselves but also their favorite vehicle, the car.

CEO Roland Schneider however didn’t want to expand the company’s parking lot. Many years ago, he remarked that "our nature is too beautiful to fill it up with parking lots" and as a consequence he arranged a free company bus at the regular working hours for the employees. Now, the employees have another option to go to work without a car, apart from the company bus. Since Roland Schneider himself is an enthusiastic e-bike rider, he has launched a new campaign. Now Schneider has acquired a fleet of e-bikes and lends them out to interested employees.

A rental fee is not required; however, every leaser is obligated to go at least 80 times a year to work by e-bike. The interested employees may also use their electric bikes outside of work, in their free time, which brings real joy in the mountainous Black Forest. The campaign has fired enthusiasm among the staff and the E-bike-fleet already counts 18 vehicles. More than 15,000 km will therefore be covered by bicycle instead of by car. The E-Bike campaign is also an environmental objective registered in the current environmental statement by Schneider. The long-term objective is to avoid at least 30,000 kilometers by car. This objective will be examined in the next EMAS validation by an independent environmental verifier. Thanks to the bicycle rental, the Schneider employees are actively involved in the implementation of the objective. Besides, it is not only good for the environment, but also a favor to their health.