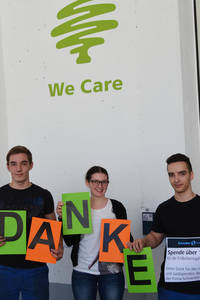 Schneider trainees saying THANK YOU to the donors

Following the terrible news of the severe earthquake in Nepal Schneider trainees organised a bake sale in the Schneider canteen to gather money for the victims. Employees from all departments were asked to bake and donate a cake for the sale. The generosity was great: 25 cakes were baked by employees from different departments and sold in the company’s canteen. Money was raised not only by selling the cakes but generous independent money donations were also made. Eventually 1000€ was donated to a German aid project. The organisation of the sale of cakes is an inherent part of the training at Schneider. The trainees organise such events with fundraisers for a charity cause twice a year. It teaches them to be socially and environmentally conscious.

The charity cake sale is a welcomed event with many benefits. Firstly, the trainees learn to organize and conduct a project autonomously, and on the other hand it creates awareness for social responsibility towards the environment and people. For Schneider employees it is a welcome change in the canteen, which brings different departments together. At the same time the donation is associated with something positive and a collective donation simplifies the donation process.

Usually the donations are made for regional institutions; however, in case of a natural disaster such as the earthquake in Nepal or the typhoon in the Philippines in 2013, the money is donated to international aid projects.

On Tuesday 2 June, 1,000 € could be transferred to the donations account of "Germany's Relief Coalition" and the "Alliance Development Works". The company and the employees are happy to be able to make a small contribution to help the people in Nepal.